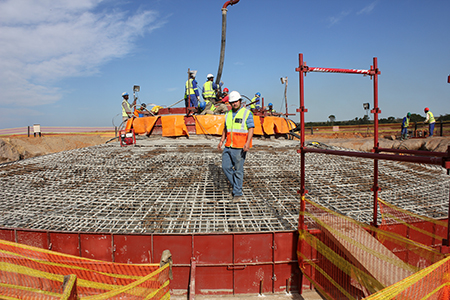 Construction of the R2 billion Kouga Wind Farm at Oyster Bay is on track with work teams upgrading access roads and casting foundation bases for the 32 turbines.

When operational in the final quarter of 2014, the wind farm will generate 80MW of clean and renewable power.

According to Pieter Taljaard, the site construction manager, 12 of the 32 concrete bases each of which is 20m in diametre to support the 80m high turbines, have been cast.

“Progress has been very good with the weather being very kind to us. Work is generally on track and in some instances even ahead of schedule,” said Taljaard.

Work has also started on the wind farm substation and is progressing well, while the electrical long lead items and switchgear have been ordered and will be installed during the first half of 2014.

A defining feature of the Kouga Wind Farm is that it far exceeds the new minimum threshold of 2.5% community participation set for each Renewable Energy Bid. The Kouga Wind Farm Community Development Trust holds a 26% shareholding in the project company and will derive income from the sale of electricity to fund health, welfare, education, local infrastructural and enterprise development projects.

The Kouga Wind Farm Project team and its sub-contractors have amongst others, been involved in the following community initiatives:

As part of the infrastructure development, Power Construction and Nordex have spent in excess of R150 000 upgrading the main access road between St Francis Bay, Oyster Bay and Humansdorp

Donated food parcels and blankets to the Sea Vista families in St Francis Bay who lost their homes when a fire broke out on Sunday 28 July 2013.

In a joint initiative with Power Construction the KWF team provides a free clinic transport service from the Oyster Bay community hall to the clinic in Humansdorp.