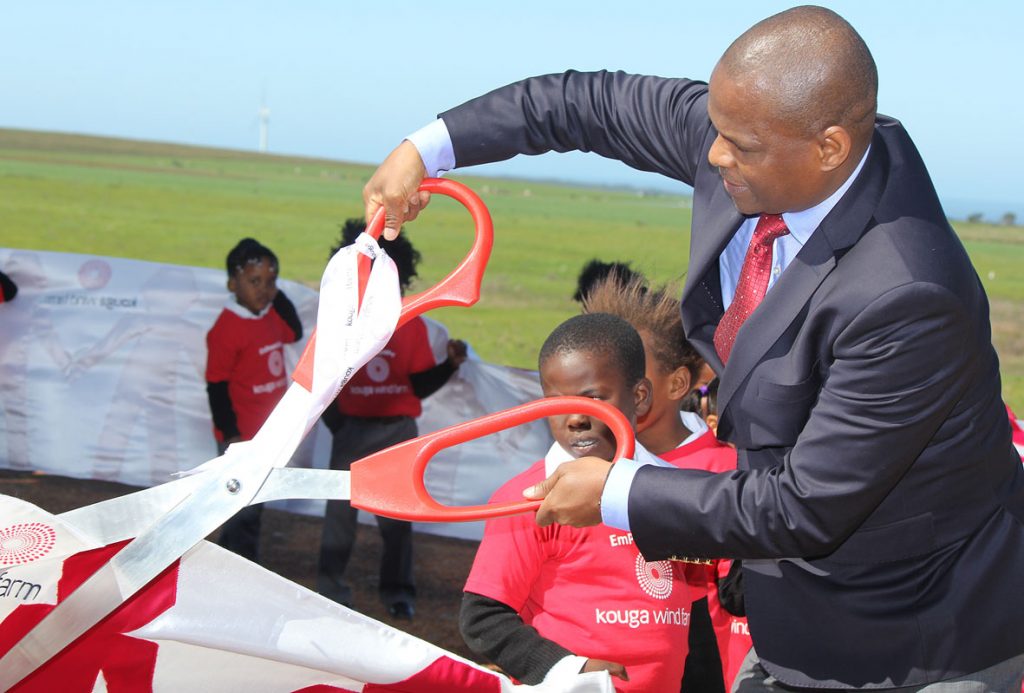 Oyster Bay, 4 September 2015 – MEC for Economic Development, Environmental Affairs and Tourism Honourable Sakhumzi Somyo has officially opened the R2bn Kouga Wind Farm at Oyster Bay in the Eastern Cape, with the 32 turbines of the fully commercial operating wind farm adding about 300 GWh per annum of clean renewable energy to the national power grid. 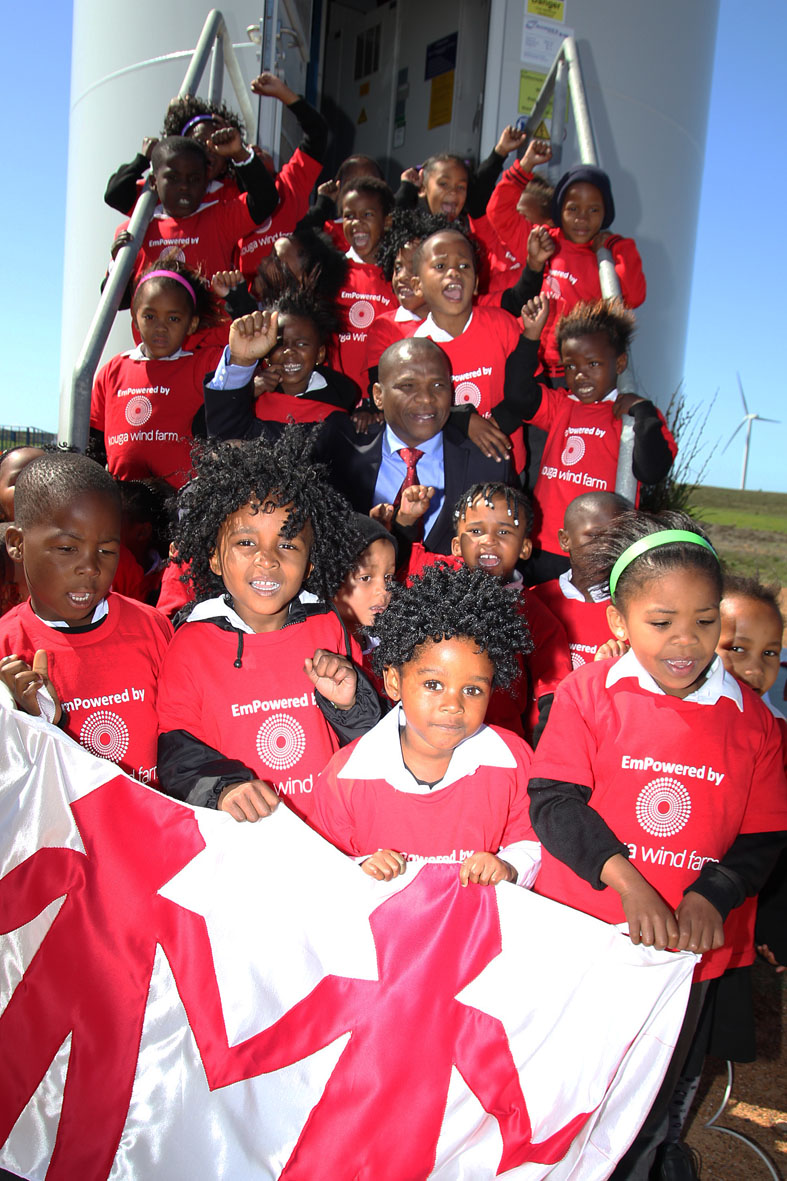 The latest CSIR report outlines that in the first six months of 2015 renewable energy provided a huge net financial benefit to the country contributing a total net benefit of R4 billion to the economy. The Kouga Wind Farm is part of this success story, generating enough electricity to supply approximately 50 000 average South African households with electricity annually and mitigating over 270 000 tons of greenhouse gas emissions annually.

During the wind farm’s two-year construction period, more than 1 000 temporary jobs were created through its engineering, construction and procurement contractor, Nordex. The project also made use of the services of 15 SMEs with the focus on the local community.

A key focus of Kouga Wind Farm is uplifting the communities in which the wind farm is involved, and the neighbouring communities of Sea Vista and Umzamowethu are the primary beneficiaries with the Kouga Wind Farm already investing about R1.7 million in health, child care, food security, education, sport, transport and infrastructure development. 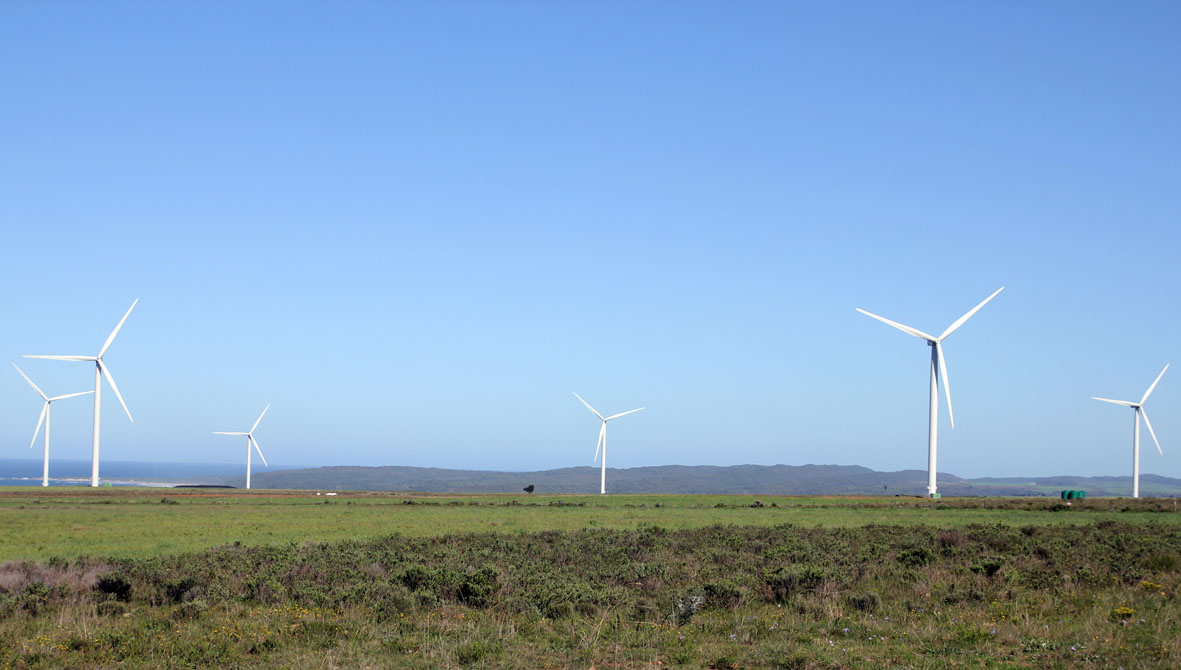 MEC Somyo, who was on site for the official opening and cut the “Circle of Friends” ribbon, said the national renewable energy procurement process required increasing commitments towards local content and the Eastern Cape could become a centre of sustainable energy manufacturing and supply for the African Continent.

“If the Eastern Cape can manufacture luxury vehicles of the highest quality, then given the right support and conditions, there is no doubt that the province can diversify further in the manufacturing of energy systems and components. I look to the Kouga Wind Farm and all the esteemed people here today to join hands in working towards the realisation of this vision,” said MEC Somyo.

Christopher Clarke, managing partner of Inspired Evolution and chairman of the Kouga Wind Farm, said: “We identified Red Cap and the Kouga Wind Farm early in 2010 because of the credentials of its development team, compelling wind resource, strength of the project advisors and counterparties, and the robust project management approach to minimising technology and execution risks. This positions the wind farm well for success in the future to ensure it delivers favourable investment returns to sustain its positive development impact obligations over its 20-year life, and we are very pleased to be a part of it.” 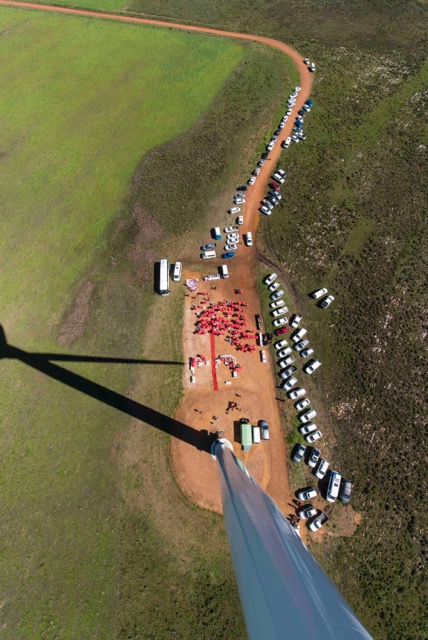 Lukhanyo Ndube, CEO of the Kouga Wind Farm, said neighbouring communities were already enjoying the benefits with R1,7 million invested in community projects from the construction phase to date, including the completion of a R300 000 mobile clinic waiting facility consisting of a waiting room, two consulting rooms and an ablution unit to serve the Umzamowethu community.

Projects are chosen to meet the needs of the community and the plans of the local municipality, based on key focus areas that were identified – namely education and literacy, skills development and training, healthcare and transport, as well as information technology and communication.

Projects include providing Sandwater Primary School in Umzamowethu with a solar powered computer lab consisting of 20 computers for learners and one for the teacher, and purchasing the ABET curriculum and training for the staff at The Rainbow School for the Disabled in Humansdorp.

“I am delighted so to see that the Kouga Wind Farm has taken concrete steps towards skills development by placing so much focus on childhood development, supporting education at foundation and secondary phases, and providing bursaries for tertiary education,” said MEC Somyo.